Goodbye to a Good Guy

Prudence was driving him, Lacey and Silver down from Cincinnati to Houston. They reached Mississippi when the air conditioner in the van went out, punctured by a foreign object. Prudence stopped, got ice and a cooler, opened all the windows and continued down to Jackson and a Honda dealership to have the AC repaired.

While she was there, Titan’s larynx became paralyzed. He began choking and, despite Prudence’s frantic attempts to massage it into relaxing, he got worse and worse. The dealership rushed her and the dogs to a nearby vet, where Titan was euthanized in her arms. We knew that he was an old dog and wouldn’t last much longer, but we’re saddened that he didn’t go from this world peacefully.

Titan finished his championship as a puppy at the age of 11 months, very rare in a slow-maturing breed like Borzoi. He, and not Lacey, was destined to be our special for campaigning but a foot injury suffered in a coursing event left him with a very slight limp. He was retired to stud duties, which he performed with gusto, earning him the name of “The Love Dog.” Two of his children are group winners. 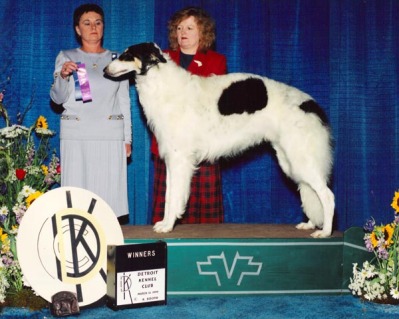